A fair of Muslim goods, timed to coincide with the holy month of Ramadan, was held in the capital of the Chechen Republic. It was possible to choose clothes, accessories, halal products and cosmetics, beard grooming kits.

According to the organizers, the exhibition-fair is focused not on religion, but on the way of life, traditions, how and by what people live in the Muslim East. For several years the event has been held in the Russian capital. This year the organizers decided to move to Grozny.

About 50 trade marks were presented at the fair held in the capital of the Republic. Manufacturers from Syria, Azerbaijan, Turkey, the North Caucasus and Tatarstan brought their products.

The products of Boomzi group of Chechen designers were very popular among the visitors. On T-shirts, prints for phones, traditional motifs of the peoples of the Caucasus, Chechen, Dagestan and Circassian folk heroes are used. Designer Madina Gazieva presented 25 Chechen scarves with unique patterns and patterns using the letters of the Russian and Chechen alphabets.
< br> The organizers of the exhibition-fair emphasize that one of the main ideas of the event is the support of Muslim manufacturers. At the same time, the products are designed not only for Muslims and the countries of the East. For example, halal cosmetics, which are produced using water from the purest mountain rivers, are popular with non-Islamic people.

Narmin Ichaeva, one of the organizers of Wandi Ramadan Bazar, specified that the capital of the Chechen Republic is now the center Muslims in Russia. Therefore, it was decided to hold the event here. Many Islamic manufacturers are considering opening offices in Grozny and even moving production here. In addition, Grozny Mall, the largest shopping center in the Republic, is expected to open soon. < br>

Transcontinental autoexpedition "To the East!" finished in Chukotka

New administrative center of Akhal velayat to be built by 2022 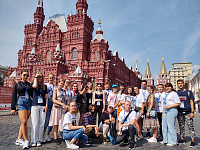 Schoolchildren from Kazakhstan took part in the program "Hello, Russia!"

In Ulyanovsk, a man rescued a cat from a separator knife