The news on local television and in the newspaper "Naryana Vynder" helped vigilant citizens to make the right decision.

A 35-year-old resident of the region voluntarily brought a bag with illegal weapons to the employees of the Rosgvardiya, found in a forest during mushroom picking. The vigilant citizen was helped to make the right decision by his wife, who saw on local television and read in the newspaper "Naryana Vinder" news about the program for the surrender of illegally stored weapons in exchange for a monetary reward.

The object, structurally similar to a smoothbore long-barreled hunting firearm, was sent for forensic examination to the Department of the Ministry of Internal Affairs of Russia for the NAO. The gun will be checked for suitability for the production of a shot. According to the results of the examination, the issue of paying a monetary reward to a vigilant citizen will be resolved.

"I would like to note that in just one week, residents of the Nenets Autonomous Okrug voluntarily handed over four units of unregistered firearms to us. This is largely due to purposeful preventive work with the population, in which regional mass media actively help us," explained Police Major Dmitry Popov, Senior inspector for special assignments of the TSLRR of the Rosgvardiya Department for the NAO.

Renovation in the Far East will begin this year 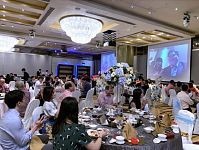 In Singapore, lovers got married online

The beaches of Sochi reopened for swimming