Georgia will receive the first batch of Chinese coronavirus vaccine by the end of the week.

The Georgian government expects to receive the first batch of 100,000 doses of Chinese-made coronavirus vaccine by the end of the week. This was announced on Tuesday by the head of the Ministry of Health of the Republic Ekaterina Tikaradze at a briefing after a meeting of the Interdepartmental Coordinating Council for Combating Coronavirus under the Prime Minister.

“By the end of the week, we expect the vaccine to arrive from China. That is, from next week we will have the opportunity [to be vaccinated] with the Chinese vaccine, which, as you know, is also recognized by the strict regulatory authority of Hungary,” said Ekaterina Tikaradze, adding that we are talking about 100 thousand doses.

As the minister noted, after the vaccine arrives in Georgia, they will ask the World Health Organization (WHO) to give them the right to start vaccinating people with it. Ekaterina Tikaradze did not specify what kind of vaccine Georgia would receive from China, however, as the director general of the National Center for Disease Control and Public Health of the republicAmiran Gamkrelidze stated earlier, the authorities of the republic have drawn up an agreement on purchase of 100,000 doses of Chinese-made vaccine Sinopharm (Sinopharm).

Vaccination of the population against coronavirus with the British-Swedish company AstraZeneca ("AstraZeneca") began in Georgia on March 15. According to the Ministry of Health, more than 5.7 thousand health workers and people over 65 have been vaccinated. Since Tuesday, vaccination with Pfizer has also begun. The authorities plan to vaccinate 60% of the population (about 1.7 million people) by the end of the year in order to form herd immunity.
Georgia China vaccine coronavirus COVID-19 TASS
|
Facebook
|
Twitter
|
VKontakte
|
Odnoklassniki

Noodles are sold out in Japan because of the series 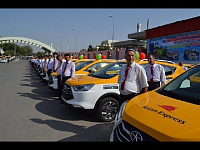 Dushanbe has decided on a single color of the taxi

Sergei Lavrov had a telephone conversation with the Chinese Foreign Minister

The Vostok-2022 exercises started at the training ground in Primorye

The capital of Indonesia will move away from the ocean