Foreigners leaving Indonesia due to COVID-19

More foreigners are leaving Indonesia amid a surge in the country's coronavirus cases, fueled by the rapid spread of the delta variant, which was first detected in India.

Indonesia has been confirming between 30,000 and 50,000 infections a day this month. A record 2,069 deaths were recorded on Tuesday, the highest worldwide for that day.

Officials at Soekarno-Hatta International Airport near the capital Jakarta report fewer than 20,000 foreigners a month fled Indonesia between January and May.

However, they said that figure exceeded 20,000 last month, and as of Thursday this month, 20,215 people left the country.

Officials say 3,320 Japanese left Indonesia in July. This is the largest proportion of foreigners who left this month.
They add that many people from China, South Korea and the United States have also left the country.

The Japanese Embassy in Jakarta reports that 13 Japanese citizens who were in Indonesia have died from COVID-19 in a month-long period since the end of June.

The main temple of the National Guard is preparing for Christmas 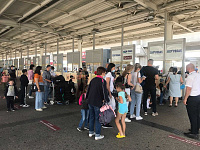 On July 3-4, Novosibirsk will host the first International Congress of Women from the SCO and BRICS countries

In Ulaanbaatar, the foundation was laid for the "Stela of Memory", dedicated to the Russians who went to the front from Mongolia

Temples in Myanmar during the pandemic were attacked by robbers

More than 1.21 billion people in China have been fully vaccinated against COVID-19