At the first stage, the vaccine will be produced from Russian raw materials, said Bahodir Yusupaliyev, head of the Sanitary and Epidemiological Welfare and Public Health Service of Uzbekistan.

The first batch of the Russian Sputnik V vaccine was produced at the Jurabek laboratories in the city of Almalyk, Tashkent region of Uzbekistan. This was announced on Friday by the head of the Service for Sanitary and Epidemiological Welfare and Public Health of Uzbekistan. Bakhodir Yusupaliev.

“The first batch — the bottling of the Sputnik V vaccine — has already been produced. It was sent to the National Research Center for Epidemiology and Microbiology named after N.F. Gamaleya in Russia in order to control the quality of this vaccine. This is a necessary procedure, it is carried out everywhere, now we are waiting for the results of the check, after which it will be possible to carry out full-fledged production in our republic,” Bakhodir Yusupaliev said live on the Uzbekistan-24 TV channel.

He also said that at the first stage, the vaccine will be produced from Russian raw materials, then a full production cycle will be established from local components, for which the construction of a new laboratory has already begun.

Mass vaccination of the population in Uzbekistan began in April . For this, the Russian Sputnik V vaccine is used, as well as a drug manufactured in India under license from the British-Swedish company AstraZeneca, and a vaccine from the Chinese company Anhui Zhifei Longcom Biopharmaceutical. According to the latest data, about 1.5 million people were fully vaccinated in the republic with a population of about 35 million people, and almost 5 million people in Uzbekistan received the first component of one of the three vaccines.

On Friday, 3 million 60 thousand people were also delivered to Uzbekistan doses of Moderna's vaccine allocated to Uzbekistan free of charge under the international COVAX program. This drug is one of three used in the US and one of six vaccines approved by the World Health Organization for emergency use. The vaccination course consists of two doses administered 28 days apart. You can store this drug in a regular refrigerator.
Russia Uzbekistan vaccine Sputnik V production coronavirus COVID-19 TASS
|
Facebook
|
Twitter
|
VKontakte
|
Odnoklassniki 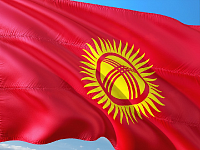 Kyrgyzstan wants to return compatriots from Afghanistan to their homeland

Egypt and Qatar have received the status of SCO dialogue partners

About 40 Syrians returned to their homes in a day

Pictures on tea bags are painted in Istanbul