About 90 volleys will be fired in Abu Dhabi as part of the annual Mother of the Nation festival.

It traditionally attracts thousands of spectators. The fireworks competition will be held on March 15-16 and 22-23. The 15-minute shows were prepared by participants from several countries. You can watch fireworks from the Corniche of the capital of the United Arab Emirates.

A panel of judges will judge each salvo on parameters such as space filling, originality of composition, color scheme, tempo and audience reaction.

Recall that New Year's fireworks in Dubai entered the Guinness Book of Records. In six minutes, 400 thousand fireworks were fired from 400 points. The show involved the skyscraper Burj Khalifa, the sail-shaped building of the Burj al-Arab hotel and the entire island of Palms. More than 200 specialists prepared the festive program.

Tens of thousands of foreign tourists were able to watch the fireworks. All hotel rooms overlooking the coast were booked in the middle of last year. For the convenience of vacationers in Dubai, they organized round-the-clock operation of the metro and launched free buses between the most popular places in the city.
Asia news UAE Abu Dhabi Dubai records Guinness Book of Records Burj Khalifa Burj Al Arab fireworks
|
Facebook
|
Twitter
|
VKontakte
|
Odnoklassniki

As part of the SPIEF, they spoke about the attractiveness of Moscow for foreign investors

The Russian port on the Pacific Ocean will grow

Rare photos of the dog Hachiko appeared on the Web

In Kabardino-Balkaria they chose their queen 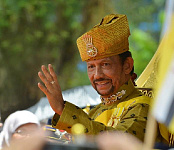