The UAE created a drawing in honor of the Emir of Kuwait, Sabah al-Ahmed al-Jaber al-Sabah, on the occasion of the National State Day in that country.

The area of the sand image in the Al Qudra desert was 15,800 square meters. Volunteers spent 100 days making the portrait. The picture is visible even from space. The work is called "The Prince of Mankind".

Recall that in 2014, the largest sand portrait in the world was already created in Dubai. Then the size of the image of Zayed bin Sultan Al Nahyan was 10.5 by 12 meters. The drawing took about a hundred bags of multi-colored sand.

Note that the Emirates have been mentioned in the Guinness Book of Records almost 200 times. Last year alone, the country was honored for the largest cup of hot tea with a volume of 5,000 liters and the world's largest mosaic of 25,000 laptops.

Dubai entered the Guinness book for a large-scale light and sound show, the ride of a local policeman on the rear wheels of an ATV. He covered 60 kilometers in an hour. A puzzle of 6,000 square meters was also created in the emirate.

Georgia will set a ceiling on prices for medicines

Chechnya fulfilled the vaccination plan by 90%

Residents of Uzbekistan asked to pray at home during Ramadan

Women's Economic Forum to be held in the capital of Dagestan 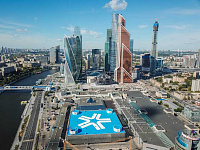 Cruiser sunk after Tsushima found in Sea of Japan (video)