The fruit went under the hammer at the annual Densuke auction for nearly $7,000.

The berry without stripes is a perfect oval shape, and the flesh of the watermelon is almost completely pitted, which is most valuable for the fruit, whose weight was about 11 kg.

A Japanese entrepreneur bought a watermelon, who considered it an honor to participate in this event. He called his victory at the auction an excellent sign for business.

It should be noted that before the most expensive watermelon in the world went under the hammer for $6 thousand.

Farmers assured that this year the berries should be especially sweet and tasty, because the weather turned out to be the most favorable for their ripening.

Recall that the Densuke variety of watermelon was bred in the Japanese city of Toma in the 1980s. Once, when the rice harvest was very poor, some farmers, in order to somehow compensate for the damage, decided to try to grow these berries. At the same time, the name appeared, consisting of the hieroglyphs "rice field" and "help". 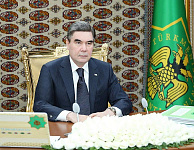 Russia has created an effective vaccine against COVID-19

Sri Lanka handed over two tons of tea to Pakistan