The airline is currently negotiating with Middle Eastern partners to start regular flights from Baku to Medina, Jeddah (from May 18), Gassim (from June 15) and Hail (from July 1) from May 15.

Earlier, an agreement was reached with the authorities of the monarchy on the implementation of flights from June 15 to such cities of Saudi Arabia as Ed-Dammam and Riyadh, the press service of Azerbaijan Hava Yollary reported.

Thus, the number of cities in Saudi Arabia, to which flights will be operated by the national air carrier of Azerbaijan, will be increased to six.

The opening of new flights will attract an additional flow of tourists from the Middle East, make religious shrines more accessible, and deepen business relations between two countries, the airline noted.

"Azerbaijan Hava Yollary" ( Azerbaijan Airlines) is the first national airline founded after the country gained independence. The base airport is the Baku International Airport named after Heydar Aliyev, located 20 km northeast of Baku. The airline's fleet consists of 16 aircraft, including Boeing 757-200, Airbus A319, Airbus A320, Boeing 767-300, Airbus A340-500, Boeing 787-8 Dreamliner

Warm blankets were handed out to the homeless in Petropavlovsk, Kazakhstan

On the Day of Heroes of the Fatherland, the Russian Guard holds an all-Russian action 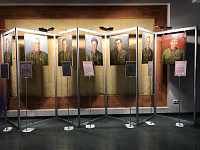 Clinical trials of the Sputnik V vaccine have begun at MEDSI

The People's Favorite award will be presented in Astana

Electric buses will appear in Vladivostok

China's high technologies, the energy of the Celestial Empire, the first train to Belarus, rural affairs of China, the Silk Road in stamps - See the Chinese panorama – 382

From colony to power: how India has changed in 70 years of independence