The find was made near the city of Al Ain and is of great importance for the history of Islam.

Until our time, only fragments of the foundation of a religious building, which was made of burnt bricks, have survived. After analyzing the material taken from the base of the building, it was concluded that its construction dates back to approximately the 8th-9th centuries, RIA Novosti reports. This time is also called the "golden age" of Islam. It was then that the still young religion was rapidly spreading throughout the region and formed a new system of values and beliefs. Irrigation facilities and other structures were also found near the mosque.

It was possible to determine that the found ruins are the foundation of the mosque, after studying the building plan. Two niches (mihrab) oriented to the Kaaba were found in it. This is a Muslim shrine in the form of a cubic building in the courtyard of the mosque. When praying, believers situate themselves facing her. One mihrab is located on the adjacent territory, and the other is inside the ancient building. This suggests that the first Muslims, as in our time, could turn to Allah both inside the place of worship and outside.

According to the Abu Dhabi Department of Culture and Tourism, the discovery of such an ancient mosques are very valuable for Muslim history. The discovery suggests that already at the dawn of Islam, this religion had a significant distribution and influence in the region, despite its great distance from Mecca - the place where Islam appeared.

Action in support of teachers started in Tashkent

Circus elephants ran through the streets of Kemerovo 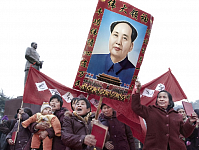