All-Russian competitions in underwater robotics will be held in Vladivostok

The competition aims to train a new generation of technology leaders.

All-Russian competitions in underwater robotics among schoolchildren and students will be held on May 6-7 in Vladivostok. The teams will have to develop remote-controlled uninhabited underwater vehicles that will carry out tasks for diagnostics, repair and work in the Arctic, TASS was told in the press service of the Circle Movement of the National Technology Initiative (NTI).

"All-Russian competition in underwater robotics among schoolchildren and students will be held in Vladivostok in May 2022. The winners and prize-winners of a series of district competitions that will be held in Tyumen, Sevastopol, Astrakhan, Moscow and Novosibirsk in the spring will compete in the development of remote-controlled underwater vehicles. classes to university students," the report says.

The competitions are held as part of the project of the NTI Club Movement "Engineering competitions and competitions in marine robotics", aimed at training a new generation of technological leaders. The organizers of the competition are the Center for the Development of Robotics and the Maritime State University named after Admiral G.I. Nevelskoy. This year the competition is dedicated to the United Nations Decade of Ocean Sciences for Sustainable Development. Each team will have to develop their own remote-controlled uninhabited underwater vehicle, which will be able to perform tasks simulated in the conditions of the pool for diagnosing and replacing an underwater cable, repairing elements of a marine farm, monitoring the environment and working in the Arctic.

"Project of the NTI Circle Movement is aimed at creating in the country a system for preparing youth teams for Russian and international competitions in underwater robotics, and last year our guys showed excellent results.The team of schoolchildren won the international competitions MATE ROV Competition, and the students took third place in the international competitions Robosub.I am sure that the success of our teams will be an excellent motivation and will attract more talented young people who are passionate about engineering, programming and new technologies to the field of underwater robotics," said the leader of the NTI working group "Circle Movement", NRU HSE Vice-Rector Dmitry Zemtsov, who quoted press service.

robotics among autonomous uninhabited underwater vehicles in two categories: for students of the fifth-eighth grades and 9-11th grades. The winners will represent Primorsky Krai at the All-Russian AUV robotics competition in Innopolis in June 2022. The results of the competitions will be taken into account in the NTI Talent NTO digital competency competition for schoolchildren of the NTI Club Movement, the winners and prize-winners of which will be able to receive up to 10 additional points to the Unified State Examination when entering the leading Russian universities.

"The strongest school of underwater robotics in Russia has been formed in Vladivostok in cooperation with leading universities - Far Eastern Federal University, Admiral G. I. Nevelskoy Moscow State University - institutes of the Far Eastern Branch of the Russian Academy of Sciences and the Center for the Development of Robotics. in the field of underwater robotics are spreading throughout the country and involve more schoolchildren and students. This is especially important for the actively growing market of marine technologies and the influx of personnel in this area," the press service of the Deputy Minister of Science and Higher Education of Russia Grigory Gur quoted ova.

In 2021, 99 teams of schoolchildren and students took part in the district and all-Russian competitions in underwater robotics as part of the NTI Circle Movement project. 25 best teams from different regions competed in the final in Vladivostok. The winner in the Ranger category - a team of schoolchildren from the Center for the Development of Robotics - represented Russia in the summer at the international underwater robotics competition MATE ROV Competition in the USA, where it won first place.
Russia Primorsky Krai Vladivostok competitions robotics TASS
|
Facebook
|
Twitter
|
VKontakte
|
Odnoklassniki

"Kamolot" was transformed into the Union of Youth of Uzbekistan

An online wedding can be held in Stavropol

In the Nenets District, "Guards Shift" at the National Guard was received by schoolchildren 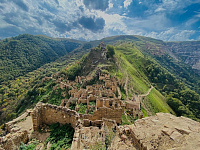 Russians will be offered charter tours to Dagestan