The Minister of Tourism of the Republic Teymuraz Hishba noted that in 2021 a record number of tourists visited for 30 years - more than 1.5 million people.

Abkhazia plans to develop the camping and international tourism industry, as the number of motorists in the republic increases every year. This was announced by the Minister of Tourism of AbkhaziaTeymuraz Hishba during a round table at the tourist forum "Travel!" taking place in Moscow these days.

"Eleven thousand cars move back and forth per day along the state border of Abkhazia with the Russian Federation on the Psou River, and this is an absolute record. People began to travel by car more often. Therefore, in the near future we will develop the camping and international auto tourism industry, especially since Abkhazia also has a huge transit potential," the press service of the Ministry of Tourism of the Republic quotes Hishba. At the same time, he noted that earlier the President of AbkhaziaAslan Bzhania instructed to develop car camping in the republic.

According to the head of the Ministry of Tourism, Abkhazia is 220 kilometers of beach and 170 kilometers from the border with Russia to the border with Georgia. Motorists can see the whole republic in a few hours, see the sights. "In 2021, Abkhazia was visited by a record number of tourists for 30 years - more than 1.5 million people, and for a republic with a population of 240 thousand people, this is a fairly large figure," he said.

In turn, the deputy head of RostourismElena Lysenkova expressed confidence that within a few years Abkhazia will be able to build a fairly extensive network of campsites in the republic.
Abkhazia tourism development camping TASS
|
Facebook
|
Twitter
|
VKontakte
|
Odnoklassniki

Families with many children will receive rented housing in Astana

Airport to appear in Zangilan region of Azerbaijan

882 Syrians returned to their homeland in a day 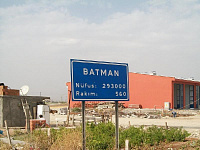