Riya Paladia, a 13-year-old schoolgirl from the village of Gaulapar, performed the most difficult asana - an element of yoga "niralamba purna chakrasana" & nbsp; 21 times in 1 minute.

In order to achieve such flexibility, the girl trains hard every day, and also runs a distance of 10 km every morning. According to the young record holder, her dream is to become a member of the Indian Olympic team and successfully compete for her country.

The previous record holders were a 13-year-old athlete who performed the same exercise 15 times in a minute. And the first Indian record holder at the time of registration of the achievement was 8 years old. Then the girl was able to do 17 repetitions of the asana.

It should be noted that niralamba purna chakrasana is considered one of the most difficult in yoga.

The Guinness Book of Records also includes an achievement for the most mass practice of this practice. Then the Prime Minister of India =1107043">Narendra Modi personally conducted classes for several tens of thousands of people who gathered on this occasion in one of the central squares of the city of New Delhi. This action was timed to coincide with the International Day of Yoga.

About 35,000 people sat in the lotus position at the same time, including government officials and many foreign diplomats. The organizers also made sure that everyone who gathered got a rug, and correctly distributed people on the ground so that no one would interfere with anyone.

Communication between Krasnodar and Sochi will be preferential for children

The world's largest flower Mickey Mouse appeared in the UAE

Wooden traffic police cars appeared on the roads of Novosibirsk 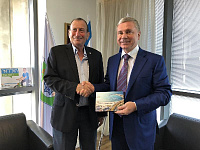 The calculation of the subsistence minimum may be changed in Georgia

NAO journalists awarded for covering the activities of the National Guard