The 3D reconstruction will be accompanied by reference texts, photos and an audio guide.

Architects of the Tomsk State University of Architecture and Civil Engineering (TSUACE) will make a virtual reconstruction of the lost complex of buildings of the Tomsk St. John the Baptist Convent. Modeling is completed, after completion of work it will be possible to walk around the territory of the monastery in virtual reality, told TASS in the press service of TGASU. Maxim Artamonov.

As Maxim Artamonov explained, when all the work will be completed , with the help of a touch table and virtual reality glasses, visitors to the exposition will be able to walk around the territory of the monastery and learn about its history, the daily life of the inhabitants. The three-dimensional reconstruction will be accompanied by reference texts and photos, as well as an audio guide.

The convent of St. John the Baptist in Tomsk was one of the largest and richest in Siberia . There were 200 nuns in it, and together with the students of the theological school, the orphanage and the house of industriousness, the number of residents in the monastery was up to 400 people.

The monastery had four churches, a hospital with a pharmacy, its own candle factory, printing house, bindery. Also at the monastery there was an orphanage, a house of industriousness, a diocesan theological school.

Rectors of Tomsk universities, famous scientists, teachers and cultural figures were buried near the temples and the monastery cemetery, which is why the site was called the “Professor's Necropolis”.

The monastery was closed in 1920, the territory was then transferred to the student campus of the Technological Institute, today it is Tomsk Polytechnic University. In the early 1950s, the buildings of the monastery were dismantled.

First train with humanitarian aid from Turkey arrives in Afghanistan 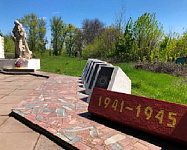 In the liberated territories, the National Guard continues the All-Russian departmental action "On Guard of Memory"

Festival of national clothes will be held in Uzbekistan