The ceremony was attended by Russian Ambassador Andrey Kulik.

The ceremony in memory of the 118th anniversary of the feat of the crew of the Russian cruiser "Varyag" and the gunboat "Koreets" was held on Wednesday in the bay of the port city of Incheon. It was attended by the Ambassador of the Russian Federation to the Republic of Korea Andrey Kulik, employees of the military attaché, diplomats, as well as representatives of the South Korean naval forces.

Corvette (in the Russian classification - a small anti-submarine ship) The Navy of the Republic of Korea delivered the Russians to the place where the Varyag and the Koreets were sunk.

“Now we are at the site of the death of the armored cruiser Varyag in the Incheon Bay, where we pay tribute to the memory of courage, dedication and loyalty military duty of our glorious ancestors. Their feat has become an example of valor, heroism and patriotism for many generations of our compatriots,” the ambassador emphasized, speaking at the ceremony. . “This tradition is a symbol of friendship between the peoples of Russia and the Republic of Korea,” said Andrey Kulik.

“Our most important task is to preserve the truth and pass it on to our descendants. And only in this case we will be able to prevent the recurrence of the tragic mistakes of the past in the present and future,” the Russian diplomat emphasized. He pointed out that at present, numerous attempts are being made in the world to cross out or distort the historical truth based on facts. “Often such acts are committed for the sake of a momentary political situation, which undoubtedly leads to the undermining of value orientations and the emergence of conflict situations,” the ambassador concluded.

Upon arrival at the port, the delegation went to the monument erected in Incheon in 2004 To the 100th anniversary of the battle of the Varyag and the Koreyets with 14 warships of the Japanese squadron. The Russians laid flowers at the foot of the monument crowned with a copper cap. The commemorative ceremony has been held in the Republic of Korea annually since the late 1990s, and even the coronavirus pandemic could not prevent it.

Monument to the heroes of the "Varyag" ” and “Korean”, designed by the sculptor Andrey Balashov, was installed on the waterfront of Incheon in February 2004. The memorial is made of garnet amphibolite, which is mined on the territory of the Russian Federation only in the town of Chupa on the Kola Peninsula. As Andrey Balashov previously told TASS, such a stone makes it possible to accurately embody the artistic concept, "reminiscent of the cold February waters of Chemulpo Bay in the Yellow Sea", where ships fought with the Japanese squadron, as well as drops of blood shed by sailors.< br>
History of the feat

On February 9, 1904, Russian sailors made a desperate attempt to break through the blockade of the Korean port of Chemulpo by the Japanese fleet and go to Port Arthur. During the unequal battle against the Japanese squadron, the cruiser "Varyag" and the gunboat "Koreets" received significant damage.

In order to prevent the capture of ships and surrender, the "Korean" was blown up, and the "Varyag" was flooded.
Russia South Korea Incheon anniversary ceremony feat cruiser Varyag TASS
|
Facebook
|
Twitter
|
VKontakte
|
Odnoklassniki

Russia to hold joint naval exercises with Iran and China

In China, there was a cafe-hollow with a bear paw

In India, “beautiful” bike numbers will go under the hammer

The design of banknotes will change in Japan

Solar energy came to the village of Markovo in Chukotka

Azimuth will launch additional flights to a number of destinations 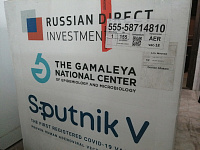 A batch of Russian vaccine Sputnik V arrived in Abkhazia 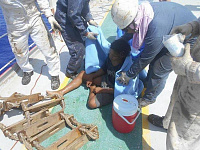 Indonesian rescued after 49 days at sea

More and more Russians are buying property in Turkey