75 foreign students will study at the master's program of the Altai State University according to the programs developed by the experts of the Center for Altaic and Turkic Studies "Great Altai".

Five International Master's Programs"Greater Altai" cover natural science, socio-economic and humanitarian profiles. They were developed by joint efforts of scientists from the Altai State University, leading universities in Kyrgyzstan and Kazakhstan. In total, 95 undergraduates will study under these programs, 75 of them – foreigners from Asia and Africa.

The most popular direction of the master's program was the program "Cross-border trade in Central Asia: management and marketing" - 29 people were enrolled in it, including 24 foreigners. 14 students from China, 3 from Tajikistan, 4 from Kazakhstan, 1 from Mongolia, 1 from Afghanistan, 1 from the Union of the Comoros and 5 from Russia will study in this direction.

The second most popular master's program created under the auspices of the "Greater Altai" is "Ethnicity of the Turkic-Mongolian world in modern art practices", it enrolled 20 people: 7 citizens Kyrgyzstan, 6 - Kazakhstan, 4 - China and 5 citizens of Russia.

Under the program "Spatial Analytics and Environmental Management in Central Asia" 18 undergraduates will study, "Digital Data Analysis Technologies for Sustainable Development of the Regions of North and Central Asia" b> – 16 people, “Social security of the media space of the Greater Altai” – 12 students.

According to the President of the Altai State University, the head of the Great Altai Research and Education Center for Altaic and Turkic Studies Sergey Zemlyukov, master's programs on the subject of Greater Altai, indeed, unique.

“They take into account intercultural specifics, they are based on a comprehensive and multifaceted study of Central Asia, therefore, after graduation, graduates will become sought-after specialists not only in Russia, but also in the global labor market,” comments Sergey Zemlyukov.

The Great Altai Research and Educational Center for Altaic and Turkic Studies is an international community of scientists, experts, and researchers united by the idea of studying and preserving the cultural and historical unity of the Turkic, Altai, and Mongolian peoples. The partners of the Center are leading universities and research centers of the Russian Federation, the states of Central Asia and Europe.

The Great Altai REC for Altaic and Turkic studies has 11 international project teams that unite about 100 scientists from partner universities. 5 groups are focused on scientific research activities, 6 - on the implementation of joint educational programs of the magistracy and programs of additional education. In 2021, the first admission of undergraduates was carried out.

An unusual record was set in the Karaganda region 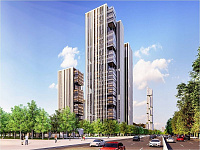 The highest skyscraper in Central Asia will be built in Tashkent

An Afghan veteran from the Russian Guard spoke about his service

Tourist charters to be launched from Moscow to Baikal