One of the main tasks of the researchers is to recreate an analogue of the Earth's gravity inside the building, which is necessary for long-term life, the TV channel reported.

Located in the west of Japan, Kyoto University and the Kajima Construction Corporation intend to jointly create a building that will be suitable for human life on Mars and the Moon in the future. This was reported on Wednesday by the NBC television channel.

According to him, one of the main tasks of the researchers is to recreate an analogue of the Earth's gravity inside the building, which is necessary for long-term life. As a solution to this problem, it is proposed to make the dwelling rotate around its axis, which, thanks to the centrifugal force generated in this way, will allow the formation of gravitational attraction.

The height of the building can be from 200 to 400 meters, the diameter is 200 meters. At the same time, at the stage of its construction, it is proposed to use not only materials delivered from Earth, but also resources located on the surface of Mars and the Moon.

"While these plans are not at a feasible stage, however, it is very important that Japan shows its achievements now, thereby making a reserve for advantages in the future. In this regard, we intend to continue research in this area," Yosuke Yamashita, a representative of Kyoto University, told reporters.

Students received grants to develop their projects in Kabardino-Balkaria 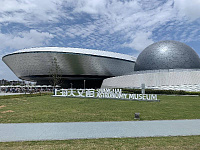 Indian and Russian scientists came up with a new material

Institute of National Variety Art to appear in Uzbekistan

"Greater Altai" became a partner of the Russian-Kazakhstan master's program

Shanghai textiles can now be used as a display