Mammoth remains were found in Yamal.

Scientists have discovered the remains of a young mammoth in Yamal, Pavel Kosintsev, senior researcher at the Institute of Plant and Animal Ecology of the Ural Branch of the Russian Academy of Sciences, said at a press conference at the Ural TASS Information Center.

"This year <...> a unique discovery of the remains of a mammoth was made. Its uniqueness is primarily due to the good preservation and age of the individual itself. A large part of the animal's skeleton was found, the most important thing is that soft tissues and most of the skin with a trunk, an eye, and an ear were preserved on it. Such a find was made for the first time, the age of the mammoth is about six years old, we have not found almost complete skeletal remains of this age either," Kosintsev said.

He noted that the discovery was made by local residents, who very promptly reported it to the Museum of Local Lore in the Tazovsky district of the Yamalo-Nenets Autonomous Okrug. After that, an expedition was organized: a reconnaissance was conducted on the spot and samples were collected for analysis.

"Now we will be able to reconstruct the natural conditions in which he lived based on the analysis of the collected samples. Of interest, of course, is <...> finding his trunk. The findings of the mammoth trunk, of course, were known before, but there was no such age," Kosintsev said. 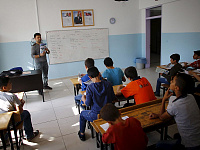 India announces construction of its own orbital station

The annual festival of physics will be held in Barnaul

Turkish President announces plans to send a spacecraft to the Moon