There will be no women among the first Indian astronauts

However, in the future they will be included in the crews.

The Indian Space Research Organization (ISRO) has decided not to include women in the first national space manned mission. This is reported by TASS with reference to the information of the NDTV channel.

The first group of Indian cosmonauts will be selected from among the military test pilots, among whom there are no women, according to ISRO. At the same time, the ministry emphasized that the representatives of the fair sex will definitely be included in the composition of future manned missions. About this intention in ISRO repeatedly stated.

Currently, the selection of candidates for space flight has already begun in India. The final list should be formed in a month.

As Big Asia reported, 12 people selected in this way will be sent to Russia, where they will undergo medical tests, according to the results of which only four of the candidates will be admitted to the full flight preparation program.

Fish resources will be counted in Georgia

At Baikonur, Russian cosmonauts held classes in the new module of the ISS 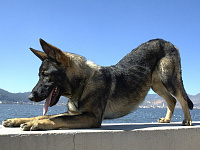 Cloned police dog being trained for service in China

"Chemistry-2017": an exhibition for industry and science professionals

At the end of the Year of Science and Technology, excursions of schoolchildren to leading scientific organizations will be held

Fragments of the Soviet "Buran" hit the photographer's lens

International Media School will teach you the basics of journalistic analytics