The developers of the Sputnik V vaccine received a state award

The winners of the award were Alexander Gintsburg, Denis Logunov and Sergey Borisevich.

The 2020 State Prize for outstanding achievements in scientific research was received by the developers of the Sputnik V vaccine. This was announced on Wednesday at a press conference in Moscow by the assistant to the President of the Russian Federation Andrey Fursenko.

“These names are already widely known to the public - Alexander Gintsburg, Denis Logunovand Sergey Borisevich. Their success with Sputnik V was no coincidence — Russia already had a backlog in the form of a platform they had created to develop other vaccines, including Ebola. These people undoubtedly deserve the award and the maximum attention of the public,” said Andrey Fursenko.

According to the decree of the President of the Russian Federation Vladimir Putin on awarding this award , Alexander Gintsburg, Denis Logunov and Sergey Borisevich were awarded “for the development and implementation of effective recombinant vaccines against Ebola and a new coronavirus infection into domestic healthcare practice (COVID-19), as well as for the development of technology for constructing viral delivery systems for cassettes with the insertion of the Ebola virus glycoprotein gene and the SARS-CoV-2 S-protein gene. before society and the state. It is the main Russian award, having inherited this name from the State Prize of the RSFSR in 1992. In addition to monetary rewards (since 2020, the amount of the prize has been doubled to 10 million rubles), laureates receive a diploma, a badge of honor, and a tailcoat badge.
Russia scientists prize vaccine Sputnik V coronavirus COVID-19 TASS
|
Facebook
|
Twitter
|
VKontakte
|
Odnoklassniki

The first biofuel-powered aircraft flew from the UAE 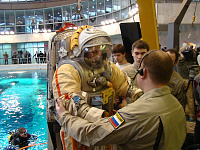 Novosibirsk physicists have developed a powerful "battery" for the SKIF synchrotron

A doctor from Nepal became the 100,000th RUDN University graduate