From February 21 to February 23, the Sibur Arena concert and sports complex (Football Alley, 8) will host the large-scale Defender Cybersport Festival.

The festival will bring together professional athletes and eSports enthusiasts, as well as guests and residents of the city interested in the modern gaming industry.

The organizer is the St. Petersburg Computer Sports Federation with the support of the Government of St. Petersburg.
More than 200 teams participated in the qualification from five countries (Kazakhstan, Russia, Ukraine, Latvia, Lithuania). Eight teams will take part in the final, including the strongest Quantum Bellator Fire, forZe, Team Spirit, Espada.

The key event will be the Counter-Strike: Global Offensive tournament between the teams of St. Petersburg State University and the Polytechnic University in the fight for the championship title and a prize fund of 1 million rubles. Visitors will also enjoy a cosplay show, VR zones, an interactive exhibition of retrocomputers from RetroTech Squad and a playground for FIFA 2018 e-football fans.

The expected number of visitors to the Festival is more than 3,000 people.

China has developed a unique drone

Ancient vases with milk and butter found in Mongolia

Japan decided to arrange a "starfall" 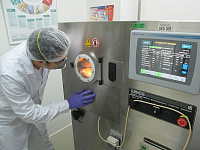 Uzbekistan has created a commission for the development of space research