Scientists have learned when livestock first appeared in the Ferghana Valley

Archaeologists have discovered in Kyrgyzstan the first evidence that the nomads of Central Asia began to breed sheep in the Neolithic period, more than eight thousand years ago.

“Archaeological and biomolecular traces that we found in the Obishir-5 cave in southern Kyrgyzstan suggest that sheep were domesticated in Central Asia as early as the sixth millennium BC. This pushes back the appearance of domestic animals in the Fergana Valley by three thousand years and suggests that pastoralism became the basis of life in this region much earlier than is commonly believed," the researchers from the scientific journal Nature Human Behavior write.

The first livestock appeared on the territory of the Middle East, India and Iran about 12-10 thousand years ago - almost simultaneously with the emergence of agriculture and the transition to a sedentary lifestyle.

In a new study, archaeologists led by Svetlana Schneider, a senior researcher at the Institute of Archeology and Ethnography of the Siberian Branch of the Russian Academy of Sciences, found out the history of the appearance of domesticated sheep in Central Asia.They worked in the Obishir-5 cave, which is located in the Batken region of Kyrgyzstan.

During the Neolithic period, there was a site of ancient people in it. This cave was discovered by Soviet archaeologists in 1965. In addition to a large number of unusual tools, similar to grain processing tools, the researchers found here many bone fragments that presumably belonged to sheep and goats.

Previously, no attempts were made to study these remains, so it was not clear whether they belonged to wild or domestic animals. It was also unknown when they died. Schneider and her colleagues filled this gap.

They examined some of the previously found remains, and also found new bones of goats and sheep, organizing a second expedition to Obishir-5 in 2015. Scientists have found remains in those layers of sediments that date back to the time of the life of the very first inhabitants of the cave.

Scientists have calculated the exact age of the remains. In some cases it exceeded eight thousand years. In addition, the researchers found clear signs that these goats and sheep were domesticated.

In particular, this was evidenced by the fact that the protein molecules from bone fragments almost 100% coincided in composition with proteins from the bone tissue of modern domestic sheep and goats. In addition, the structure of the upper layers of the bones and enamel of the teeth of these animals indicated that they were all killed in the fall in about the second year of life. Modern nomadic peoples usually do the same.

In addition, scientists isolated DNA fragments from the five least damaged teeth of sheep and partially restored the genome of their owners. As with squirrels, his study confirmed that scientists were dealing with the bones of domesticated rather than wild sheep. Some features in the structure of their genome show that they are related to modern European sheep and their ancient relatives from the Middle East.


All this, according to Schneider and her colleagues, suggests that the first domestic sheep appeared in Central Asia about three thousand years earlier than scientists thought in the past. The authors of the study hope that in the coming years they will be able to discover other examples of early penetration of cultural and technological innovations into the supposedly impenetrable mountainous regions of Eurasia.

scientist from Japan spoke about a rare cosmic phenomenon

Pupils of Kyrgyzstan themselves choose subjects for study 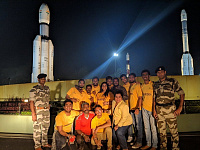 China is the world leader in AI

Roscosmos plans about 20 launches in 2022

"Long March" is preparing for the great flight

Zhuzhong traveled more than 410 meters on the surface of Mars

Russian schoolchildren win five medals at the Olympiad in Thailand