Representative offices of the Academy may appear in Yakutia and Altai

“We have requests from a number of regions to do this. We must create three to five such representations. We have applications from the Altai Territory, from Bashkiria, Yakutia and several other regions. We would not want to turn this into a campaign, it is important for us to have a few positive examples,” Sergeev said.

The President of the Russian Academy of Sciences noted that there is criticism of the creation of regional representative offices of the Academy. However, he is sure that they will not duplicate the activities of FASO and are necessary, in particular, to improve relations between scientists and the business community and help overcome the "valley of death" - the time that passes from the creation of a scientific development to its implementation in industry.

“This, of course, is the relationship with business. We still want the Academy of Sciences to play a role in the task of turning our science into a productive force of the economy,” Sergeyev said. meeting of the Russian Academy of Sciences scheduled for the end of March.

China has developed a unique drone

Shanghai scientists have created a device for rapid diagnosis of covid 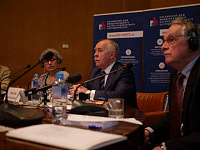 The International Exhibition "Energy" was held in Damascus