Chinese scientists have revealed that the first jawed fish appeared over 439 million years ago.

Paleontologists have discovered body prints of four previously unknown species of ancient fish aged 436-439 million years in southern China. They claim to be the oldest common ancestor of humans and modern jawed fish. This discovery pushes the time of the appearance of jawed animals by 30 million years into the past. The work was published in the journal Nature. The results were announced on Wednesday by the press service of the headquarters of the Chinese Academy of Sciences.

"The fossilized remains of the Fanjingshania fish discovered by us represent the oldest evidence of the existence of jawed vertebrates on Earth. Their discovery allowed us to learn a lot about the evolution of key features of vertebrate anatomy, including jaws, sensory organs and paired limbs," said Professor of the Institute of Vertebrate Paleontology and Paleoanthropology KANG in Beijing (China) Zhu Min, whose words are quoted by the press service of the KANG headquarters.

Most of the modern groups and types of animals appeared about 540-520 million years ago during the Cambrian explosion - a sharp acceleration of evolution and an increase in the diversity of multicellular creatures. At this time, the ancestors of worms, insects, fish and other invertebrates and vertebrates that inhabit the Earth today arose.

The first full-fledged vertebrate creatures with jaws appeared much later. The exact time of their occurrence remains a matter of dispute among paleontologists. The oldest imprints of the bodies of jawed fish date back to the beginning of the Devonian and the end of the Silurian era, 420-410 million years ago, but genetic studies show that vertebrate creatures with jaws should have appeared several tens of millions of years earlier.

Fedor Konyukhov completed a unique drift near the North Pole 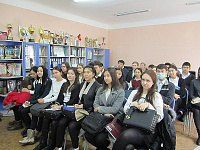 Russian universities helped Kyrgyz schoolchildren to make up their minds

In Japan, a meteorological rocket with a new engine was tested

Hayabusa-2 probe capsule will soon be lowered to Earth