The UAE hopes to strengthen cooperation with Russia in the field of space.

The UAE hopes for further cooperation with Russia in the field of space exploration. This was stated to journalists on Sunday by the Ambassador Extraordinary and Plenipotentiary of the UAE to the Russian FederationMohammad Ahmad Sultan Essa Aljaber at the closing ceremony of the eight-month isolation experiment SIRIUS-2021.

The crew of the SIRIUS experiment, which ends on July 3 in Moscow at the Institute of Biomedical Problems, also included a representative of the UAE. "I am sure that the crew showed professionalism and fulfilled the task," the ambassador said.

Previously, representatives of the Institute of Biomedical Problems (IBMP) RAN and At the working meeting, the Mohammed Bin Rashid Space Center (MBRSC, UAE) agreed to expand cooperation and further participation of MBRSC in the SIRIUS-2021 isolation experiment. At the same time, MBRSC participants agreed to cooperate in other analog projects.

As part of the SIRIUS (Scientific International Research In Unique terrestrial Station) project, space flights are simulated on the basis of the Ground-based Experimental Complex of the Russian Academy of Sciences. The objective of the project is to ensure the possibility of space exploration beyond low Earth orbit, which will reduce the risks to human health and performance through a targeted program of fundamental, applied and operational research. 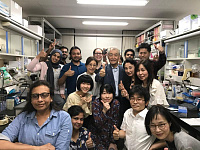 Robot teacher from Skolkovo will teach at an Indian school

The "personnel" of the terracotta army has increased

The results of the implementation of the project “Together. To gather" in Kyrgyzstan and Spain