NSTU NETI has developed a mobile application for remote tracking of hives.

Students of Novosibirsk State Technical University (NSTU NETI) have created an algorithm that allows you to control the process of swarming bees - the division of an insect colony into parts, which threatens the beekeeper with the loss of part of the bees. Based on the algorithm, the device predicts the beginning of the swarming process, and the beekeeper receives an alert on his smartphone, university student, developer Viktor Lapshin told TASS on Thursday.

He explained that during swarming, the bee colony is divided into several parts, one of which flies away in order to create a new colony. This process brings losses to beekeepers, as they lose part of the bees, honey, and, accordingly, profits. The swarming process is usually preceded by a certain sound that the queen bee emits at certain frequencies, with a certain interval.

The device is a stationary base station, which is installed in an apiary, a sensor is installed in each hive that detects signs of the singing of the uterus. The sensors send a signal to the base station, from there the signal is transmitted to the server and to the beekeeper's mobile application. Thus, the beekeeper receives a signal about the beginning of swarming in a certain apiary, in a certain hive and manages to prevent the loss of bees.

The developer and technical director of the project, Daniil Briginets, added that there are no analogues to the project in Russia, there are developments of "smart" hives capable of monitoring temperature and humidity in hives, but there are no devices for monitoring the swarming of bees.

The developers plan to patent the algorithm. In the near future - the opening of a small pilot production.

Kazakhstan will not force residents of the republic to vaccinate

The remains of a prehistoric bison found in the Astrakhan region

In Sichuan, the remains of another ancient lizard were raised to the surface 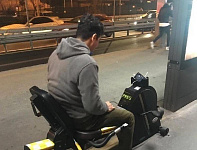 Khabarovsk Museum got a unique collection of artifacts