China has artificially increased precipitation with the help of a drone.

China has conducted an operation to artificially increase precipitation over the Qinghai-Tibetan Plateau using a Wing Loong - 1H unmanned aerial vehicle for civilian purposes. This was reported on Sunday by the Xinhua news Agency with reference to the Aviation Industry Corporation of China.

"Wing Loong - 1H detected an accumulation of clouds over the Amnye-Machen ridge in the Sanjiangyuan [Qinghai-Tibetan Plateau] area and successfully carried out artificial intensification of rain and snow precipitation," the corporation said. The operation lasted about five hours, as a result, Chinese specialists managed to carry out the procedure of "seeding clouds" on an area of up to 15 thousand square kilometers.

The drone was equipped with special equipment for detecting cloud clusters, studying their characteristics and structure, as well as equipment for increasing precipitation.

This operation was prepared and carried out jointly by the China Meteorological Administration, the Aviation Industry Corporation of China and a number of other specialized Chinese scientific institutes.

In 2018, China tested a weather modification system that allowed using a network of combustion chambers to increase the amount of precipitation in the Tibetan Highlands to 10 billion cubic meters. m per year.

Mongolian schoolchildren and their teacher win a competition in Busan

Russia and Kyrgyzstan to discuss problems of journalism and media formats 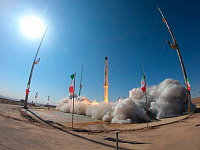 NEC has developed a "smart mask" for firefighters