The development did not cause a negative immune response in mice and prevented inflammation in the intestines of sick rodents.

Chinese researchers have found that the symptoms of Crohn's disease and ulcerative colitis can be effectively suppressed with the help of small gold nanoparticles. The scientists' findings are published in the journal Fundamental Research.

Crohn's disease and ulcerative colitis are types of inflammatory bowel disease. During these processes, a person may have diarrhea, fever, abdominal pain, blood in the stool, ulcers in the mouth and other symptoms. Currently there is no cure for Crohn's disease, so the existing therapy is aimed at reducing the inflammatory process. In the treatment of ulcerative colitis, anti-inflammatory drugs are also used, but in some cases the patient may be operated on.

Researchers have developed an approach that suppresses inflammation and normalizes the work of the intestinal mucosa using a set of nanoparticles. These are spherical structures with a diameter of 25 nanometers, consisting of gold atoms.

It turned out that nanoparticles actively interact with hydrogen peroxide molecules, single oxygen atoms and other chemically aggressive molecules that accumulate in the intestines of patients. Researchers have suggested that they can be used to suppress symptoms.

To do this, scientists have developed a technique that allows the synthesis of nanoparticles at room temperature. The team tested the work of these structures on the cells of the intestine and the immune system. Experiments have shown that gold nanospheres suppressed inflammation, and also increased the activity of enzymes associated with the production of natural antioxidant molecules.

"Our nanoparticles suppressed inflammation in intestinal tissues for more than 24 hours. Their main advantage is that these nanostructures can be taken by mouth, which saves patients and doctors from having to carry out various invasive procedures," said a researcher at Sun Yat-sen University in Guangzhou (China)Wang Fei, whose words are quoted by the press service of the magazine.

Experiments on healthy mice and rodents suffering from ulcerative colitis showed that nanoparticles did not cause negative reactions from the immune system of mice, and also successfully suppressed inflammation in the intestines of sick rodents.

The researchers believe that these nanoparticles can become a safer and longer-acting alternative to anti-inflammatory drugs that are used now.

Indonesia to launch its own satellites by 2040 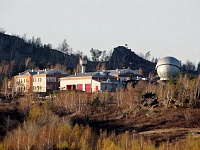 Emergency satellites will be tracked by a special observatory

Samsung to launch foldable smartphone in 2019