The Japan Aerospace Exploration Agency (JAXA) began accepting applications for a new set of astronauts from Monday, who will be involved in the lunar exploration program, among other things. The competition will run until March 4 next year.

Application forms can be submitted through a website specially created for this purpose. After checking the documents, the selected candidates will have to pass four stages of examinations. The final list of those who passed the entire competition will be published in February 2023. After that, future astronauts will officially find a job in JAXA and start training.

The main requirement for selection is at least three years of work experience. Compared to the last intake, which took place 13 years ago, JAXA refused to admit only people with a science or technical education to it. This relaxation is due to the fact that the programs for the exploration of the moon may require specialists with different education. In addition, candidates must have good eyesight and hearing, although in general health requirements have also become softer.

If hired, the salary of new JAXA astronauts at the initial stage will be from 320 thousand to 360 thousand yen (from 2.8 thousand to 3.2 thousand dollars). In addition, there is an annual increase in wages, bonuses and other payments, for example, for overtime work. JAXA now has seven astronauts, with an average age of 52. By the 2030s, when active exploration of the Moon is expected, only two of them will remain in service, the rest will have to retire.

In the spring of 2019, the US National Aeronautics and Space Administration (NASA) announced a draft program exploration and exploration of the Moon Artemis. In its third phase, it is planned to land astronauts on the Earth satellite approximately in the late 2020s, and then send them to Mars around the mid-2030s.

Tokyo in 2019 announced its decision to join the American lunar program. The Ministry of Education, Culture, Sports, Science and Technology of Japan and NASA signed an agreement on cooperation in the field of exploration of the Earth's natural satellite. We are talking about cooperation in the supply of equipment, the exchange of data on the lunar surface, the joint creation of a lunar rover, as well as the possible sending of Japanese astronauts to the moon.
Japan space Moon astronauts JAXA TASS
|
Facebook
|
Twitter
|
VKontakte
|
Odnoklassniki 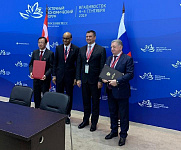 On the sidelines of the EEF, an agreement was signed on the development of a project to create a Vocational Education Center in Moscow with the support of the Rostec State Corporation

China's spacecraft is approaching the far side of the moon