Israeli archaeologists have unearthed gold coins from the Byzantine period

A rare gold treasure from the Byzantine era has been found in the north of Israel.

Israeli archaeologists have discovered during excavations in the north of the country a rare treasure of 44 gold coins of the Byzantine period. This was reported on Monday by the Department of Antiquities of the Jewish State.

The excavations were carried out at the site of the ancient city of Baniyas in the Hermon Creek Nature Reserve in the Golan Heights. They were carried out by order of the energy company "Hevrat Hashmal" as part of the work on connecting a religious place sacred to the Druze in this area to the power grid, the press service of the department noted.

According to numismatics expert Gabriela Biyowski, the treasure consists entirely of gold solidi - the main gold coin of the late Roman Empire and Byzantium. Several coins belong to the reign of the Byzantine Emperor Phokas (602-610), most of the treasure was minted during the reign of Emperor Heraclius (610-641). The last coins of the time of Heraclius date the treasure to the period of the Muslim conquest of the territory of modern Israel in 635 AD, indicated in the Department of Antiquities.

The head of the excavations on behalf of the department, Yoav Lehrer, in turn, noted that "the treasure with a total weight of about 170 g was buried in the base of the hewn stone wall during the Muslim conquest." "This discovery allows us to look into a specific historical moment, imagine the owner of the treasure, who probably hoped that he would be able to avoid the threats of war and return for his property. Our find is sad evidence that his hopes clearly did not come true," the expert noted. He added that the find also provides a better understanding of how the economy of Baniyas was organized in the last 40 years of Byzantine rule.

During the excavations carried out in the northwestern residential quarter of Baniyas, the remains of buildings, water channels and pipes, a pottery kiln, bronze coins, fragments of many pottery, glass and metal products were also found, the Israel Antiquities Authority reported. The finds date back to the end of the Byzantine period (the beginning of the VII century AD) and the early Middle Ages (XI-XIII centuries).

Active archaeological excavations are constantly being conducted in Baniyas, as it is of great interest as a place where several cultures replaced each other, the department stressed. The first settlement on this site was founded by the Canaanites, in different periods the city was ruled by the Ptolemies, Romans, Byzantines, Arabs, Crusaders, Mamluks, Ottomans. Under the name of Caesarea Philippi, which the city received during the Roman rule, Banias is mentioned in the New Testament. According to Christian tradition, at this place the apostle Peter recognized Jesus as Christ, the Son of God, and he "handed him the keys to the Kingdom of Heaven." Israel took control of this territory from Syria following the Six-Day War in 1967.

Russian scientists will go to Syria to save ancient monuments

In India, they learned to imitate the process of photosynthesis

Archaeologists have found an ancient two-meter statue in Cambodia

In the Indian Ocean, a study of the state of the fauna

The ISS can be seen in the skies over Moscow 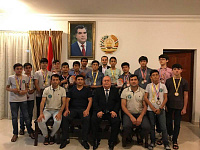 China has launched a new satellite to monitor the ecosystem