The Soyuz-2.1b carrier rocket with the Fregat upper stage, the Iranian Khayyam satellite and 16 small spacecraft launched from the Baikonur Cosmodrome on Tuesday 08:52 Moscow Time.

The Khayyam satellite in the interests of Iran, which was launched on Tuesday from the Baikonur cosmodrome, has been put into orbit, Roscosmos said in a statement.

"The Iranian Earth remote sensing spacecraft Khayyam has been successfully launched into the target orbit with the help of the Russian Soyuz-2.1b launch vehicle launched from the Baikonur cosmodrome and the Fregat upper stage," the report says.

In turn, the CEO of RoscosmosYuri Borisov noted that the launch of the Iranian satellite was an important milestone in cooperation between Russia and this country. "The successful launch of the satellite in the interests and on behalf of Iran has become an important milestone in Russian-Iranian bilateral cooperation, opening the way to the implementation of new and even more ambitious projects," the head of the state corporation said.

According to Roscosmos, 16 small Russian spacecraft were also launched into orbit, which were created by leading universities, commercial companies and non—profit organizations - CubeSX-HSE-2, Monitor-1, UTMN, CYCLOPS, Siren, on board of which there are sprouts of Belgorod lilac, KAI-1, Kuzbass-300, Skoltech-B1, Skoltech-B2, Polytech Universe-1, Polytech Universe-2, Vizard, Geoscan-Edelweiss, MIET-AIS, ISO and ReshUCube.

Citizens of Uzbekistan will take part in the MSU Scientific Festival

Russia and China will discuss joint plans for the lunar program

Parts for the Chinese space station will be made in Samara 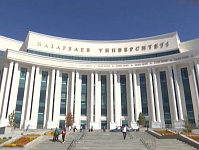