China's Chang'e-5 mission module successfully landed on the lunar surface on Tuesday. This was reported by the China National Space Administration (CNSA).

“After landing, the descent vehicle under control from the Earth officially began its work on the surface of the Moon, which will last for two days,” the message says.

At 22:57 Beijing time (17:57 Moscow time), the descent vehicle, which includes the take-off module, began to descend from height 15  km from the lunar surface. With the help of an engine with a power of 7.5 kilonewtons, he extinguished the speed from 1.7 km per second to zero. Landing on the moon took place near the calculated location at 23:11 Beijing time (18:11 Moscow time) at a point with coordinates 43 degrees and 1 minute north latitude and 51 degrees 8 minutes west longitude. As noted by the agency, the descent vehicle has already transmitted images of the landing area.

The landing site is located to north of Ryumker Peak in the area of the largest lunar sea —Ocean of Storms —in the northwest of the visible part of the Moon. As noted by the developers of the Chinese lunar mission, the geological age of the surface in this area is several billion years. Obtaining rock samples from this part of the Earth's natural satellite will allow scientists to gain a better understanding of its formation.

Planned search exercises were held at the Baikonur cosmodrome

China is waiting for the birth of a cloned kitten 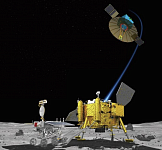 In Yamal, they found something that was previously seen only on other planets

Chinese language was introduced at the presidential school in Kyzyl

Cars in Japan will be able to stop themselves