The rocket launched two satellites, Pujiang-2 and Tiankun-2, into orbit.

China on Tuesday successfully launched the Long March 6A (CZ-6A), the nation's first solid-liquid rocket. This was announced by the China Aerospace Science and Technology Corporation (CASC).

As specified on its page on the WeChat social network (“WeChat”), the launch was carried out at 17:50 local time (12:50 Moscow time) from the Taiyuan spaceport in northern China. It became the 412th in a row for carriers of the Long March series.

The rocket launched two satellites into orbit - Pujiang-2 ("Pujiang-2") and Tiankun-2 ("Tiankun-2").< br>
CZ-6A reaches 50 m in length and runs on environmentally friendly fuel - a mixture of kerosene and liquid oxygen. It was developed by the Shanghai Academy of Space Flight Technology in cooperation with CASC. Unlike the Long March-6 (CZ-6), this rocket has an elongated first stage, the diameter of which is the same as that of the second - 3.35 m. orbit up to 4 tons of payload.

Beijing is actively developing the national space program, developing meteorological, telecommunications and navigation satellites, as well as technologies for the exploration of the moon. Chinese scientists are simultaneously implementing a project to explore asteroids and Mars. China's space station is being built in orbit, which is scheduled to start operating this year.

China made machinists out of Ethiopians

Scientists have created a protective mask capable of finding traces of coronavirus in the air.

A robot bartender appeared in a nightclub in Dubai 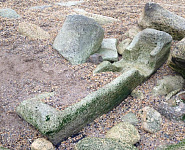 Composite for water treatment and petrochemistry created in Siberia

An unusual discovery was made in Kabardino-Balkaria