Chinese scientists set a record by holding plasma for 101 seconds at 120 million degrees.

Chinese scientists from the Institute of Plasma Physics in Hefei set a world record on Friday for holding a plasma discharge in a tokamak, a fusion facility sometimes referred to as an "artificial sun." According to the Xinhua News Agency, they managed to keep it at a temperature of 120 million degrees for 101 seconds.

The previous record for an "artificial sun" was set in South Korea in 2018, when the plasma was kept at a temperature of 100 million degrees Celsius for 20 seconds. The most important parameter of tokamak operation is the plasma confinement time in a magnetic field, so observers note that the current record of Chinese scientists has surpassed the achievement of their colleagues from South Korea by five times.

source of nuclear fusion energy, it also lays the foundation for the commercialization of physical and engineering work,” the agency quotes the words of the deputy head of the Institute of Plasma Physics Song Yuntao.

As Xinhua notes, the next stage will be the completion of construction experimental thermonuclear reactor called "artificial sun". After that, China plans to build the world's first nuclear fusion demonstration power plant.

The essence of the research

A tokamak is a facility for conducting a controlled fusion reaction, which in In the future, it can become an inexhaustible source of energy for humanity. In theory, a nuclear fusion reaction is much safer and more efficient than the nuclear fission used in modern nuclear power plants. In nature, an example of such a reaction is the Sun, where it proceeds at a temperature of 15 million degrees Celsius.

The large mass of the star and the colossal density of matter in the Sun, due to the action of gravity, make this physical reaction possible. It is unrealistic to create such conditions on Earth, so scientists need to raise the temperature to 150 million degrees. Since no metal or other material can directly contact with such a temperature, tokamaks are used for this purpose. It is a torus-shaped vacuum chamber (hollow donut) surrounded by superconducting electromagnets. This allows you to create a toroidal magnetic field in the chamber, which keeps the hot plasma at a distance from the walls of the chamber.

The word "tokamak" stands for "toroidal chamber with magnetic coils." Over time, this Russian-language abbreviation has become an international term. The first tokamak was built in the USSR in 1954.

China successfully tests the largest drone in the world

China is intensively working on the production of launch vehicles

Tomsk doctors have developed a method of corneal treatment based on cellular technologies. 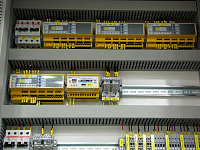 In Siberia, they created an energy storage system 30% cheaper than foreign ones

Schoolchildren of Kazakhstan and Russia performed the legendary "Cranes"