In addition, a clinic will also be opened, Podrobno.uz reports.

The corresponding decision was made during the talks between the Minister of Health of Uzbekistan Alisher Shadmanov and a delegation from Turkey led by the rector of the University of Medical Knowledge, Professor Cevdet Erdol.

< /tr> “During the meeting, which was also attended by the rectors of medical universities in our country, issues of expanding and developing ties in the field of medical education, the possibility of holding joint scientific and educational events were discussed,” the Ministry of Health noted. .

As a result of negotiations, a memorandum of understanding was signed between a number of higher educational institutions of Uzbekistan and a Turkish university. The parties also agreed to establish an exchange of undergraduate and graduate students, internships for faculty and summer internships.

In addition, in 2019-2020, a branch of the Higher Medical School, which is part of the structure of the Turkish University of Medical Knowledge. 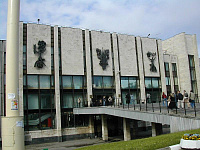 Tomsk scientists will develop a substance for quality control of medicines

Kazakhstan will conduct scientific experiments on the ISS

Schoolchildren of Kazakhstan met in the third poetic battles

Remains of village destroyed by Minoan eruption found in Turkey