student of the Orenburg State University Aziza Khemrayeva won a grant for the implementation of her project following the results of the grant competition of the Foundation for the Support of Public Diplomacy named after. A.M. Gorchakova. This is reported by "Turkmenistan: the golden age".

student from Turkmenistan presented the project “International Educational Camp “New Young Way” for the competition. The amount won for the implementation of the project is 200,000 rubles.

The results of the competition were summed up at the closing ceremony of the Eurasia Global International Youth Forum in Orenburg. In total, representatives of 106 countries of the world took part in the forum.

For foreign participants A. M. Gorchakova held a grant competition, within which 9 best projects were supported for a total of 2.2 million rubles.

Among foreign participants, representatives of Iraq, India, Turkmenistan, Moldova, Mexico, China, Kyrgyzstan, Uzbekistan and Afghanistan. Their projects were recognized as the best of more than 90 applications.

Draft design of Baiterek missile system to be developed by November

The annual festival of physics will be held in Barnaul 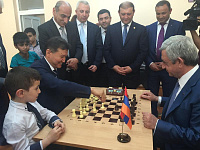 India intends to create its own cosmonaut corps

China will always strive for peace in space

In Japan, astronauts were selected for the lunar exploration program

China has launched more than 400 Long March rockets into orbit

The world's largest fusion plant will appear in China

Pakistan launches its own ventilators