An international team of scientists made a sensational discovery during an expedition studying reptile migration routes on a prehistoric continent called Gondwana.

It is believed that this formation was located in the Southern Hemisphere about 550 million years ago. Gondwana included present-day India, South America, Africa, Antarctica, New Zealand, Madagascar and Arabia.

According to Sky's website, the find is a piece of amber the size of a good cobblestone. It preserved the embryo of a prehistoric snake, which helped the scientific team to obtain valuable information.

Paleontologists now have a better understanding of the evolutionary processes of amphibians in the Middle Mesozoic era. Moreover, the find includes numerous small insects. This provides enormous material for scientific work and helps to understand what the nature of that time was like. According to Professor of the University of Alberta Michael Cowell (Canada), now the hypothesis has been confirmed that the snakes of that time lived in the forests - this is evidenced by fragments of insects, trapped in a piece of amber.

Using the method of computed tomography, the researchers conducted a comparative analysis with the embryos of modern amphibians. The obtained materials filled in many gaps in the representation of the evolution of ancient snakes. According to scientists, only the first data have been obtained. A more complete analysis of the find will take considerable time.

It is noteworthy that the find made in Myanmar is the first of its kind. Before that, researchers found more or less well-preserved remains of adults. A snake embryo discovered for the first time.

In China, a scientific forum brought together scientists from around the world

Ancient vases with milk and butter found in Mongolia

In India, found the legendary ancient capital of the country 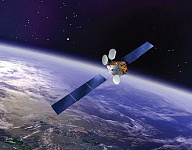 New KILIÇSAT satellite to be launched by Ankara

Digitalization of the Russian-speaking population abroad was discussed in Moscow