The Emperor of Japan approved the new composition of the government.

Emperor of Japan Naruhito approved the new composition of the government on Wednesday after a reshuffle conducted by Prime Minister Fumio Kishida. The official ceremony was held at the Imperial Palace in Tokyo, follows from the published schedule of the head of government.

The approval of the Cabinet of Ministers by the Emperor is a mandatory procedure that is carried out in accordance with the Constitution of Japan. During the ceremony, the ministers take turns receiving a special document — a notice of appointment signed by the monarch.

Foreign Minister Yoshimasa Hayashi and Finance Minister retained their posts in Kishida's second cabinetShunichi Suzuki, Minister of Public Lands, Infrastructure, Transport and Tourism of JapanTetsuo Saito, as well as the Minister of Economic RecoveryDaishiro Yamagiwa. Hirokazu Matsuno remained as the General Secretary of the Cabinet of Ministers.

Appointed to the post of Minister of Defense Yasukazu Hamada, who already headed the defense department in 2008-2009. A number of experienced politicians have also returned to the government, including the former head of the Foreign Ministry and the Ministry of DefenseTaro Kono, who headed the Ministry of Digitalization and ICT Policy, and is now the former head of the Political Council of the ruling Liberal Democratic Party (LDP)Sanae Takaichi, who became the Minister of Economic Security.

Out of a total of 19 cabinet ministers, nine have joined the Government for the first time.

Vladimir Putin will take part in the Caspian Summit in Ashgabat 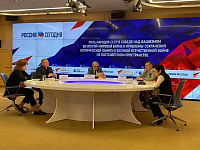 Trilateral summit on Syria could be held in Turkey in July

Trilateral summit on Syria to be held in September