Vladimir Putin and Benjamin Netanyahu to meet in Moscow

This was announced by the press secretary of the head of the Israeli government, Anna Yonatan-Leus. & nbsp;

Israeli Prime Minister Benjamin Netanyahu will travel to Moscow on April 4, where he will meet with Russian President Vladimir Putin.

"The Prime Minister will fly to Moscow on Thursday for a meeting with Russian President Vladimir Putin," Jonathan-Leus said.

Earlier it became known that Putin and Netanyahu held telephone conversations, in within the framework of which they discussed issues of cooperation between the two countries in the military sphere.

"Topical issues of bilateral cooperation, including military contacts, as well as the situation in the Middle East region were discussed," the Kremlin's press service said in a message.

Previous talks between the two politicians were held in Moscow on February 27. As a result, it was announced that a working group on Syria with the participation of Russia, Israel and other states, as well as the Syrians themselves, would normalize the situation in the SAR after the final victory over terrorism in the country.

Vladimir Putin met with the President of Tajikistan

Moscow is turning into the cleanest city in the world

The second meeting of the Presidium of the 20th CPC Congress was held in Beijing. Congress Diary 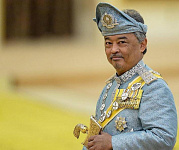 The fifteenth ECO summit was held in Ashgabat on Sunday

Shavkat Mirziyoyev will visit the One Belt, One Road Forum