The President of Kyrgyzstan will pay a visit to Azerbaijan

Sadyr Japarov will travel to Azerbaijan to discuss issues of cooperation with Ilham Aliyev.

The President of Kyrgyzstan Sadyr Japarov will leave for Azerbaijan on April 19, during which he will discuss with the Azerbaijani PresidentIlham Aliyevthe state and prospects of bilateral cooperation. This was announced on Monday by the head of the foreign policy department of the administration of the head of the Kyrgyz state Zheenbek Kulubaev.

“President of the Kyrgyz Republic Sadyr Zhaparov RepublicIlham Aliyevwill pay an official visit to the city of Baku. The leaders of the countries will discuss topical issues of bilateral and multilateral cooperation, as well as prospects for further development and building effective interaction,” the message says.

As planned, Sadyra Japarov will also meet with the chairman in Baku Parliament of Azerbaijan Sakhiba Gafarova.

“In addition, [Sadyr Japarov] is scheduled to meet with representatives of Azerbaijani business circles, during which information about Kyrgyzstan and prospects for cooperation in the trade and investment sphere,” said ZheenbekKulubaev. He recalled that the upcoming visit of the President of Kyrgyzstan will take place on the eve of the 30th anniversary of the establishment of diplomatic relations between the two countries.

As a result of the visit of the President of Kyrgyzstan to Azerbaijan, it is planned to sign a number of bilateral documents, including a declaration on strategic partnership, a memorandum on the establishment of interstate council, as well as "intergovernmental and interdepartmental agreements that meet the interests of states."
Azerbaijan Kyrgyzstan President Sadyr Japarov Ilham Aliyev visit TASS
|
Facebook
|
Twitter
|
VKontakte
|
Odnoklassniki

"China and the world in a new campaign" in Russia: Media Corporation of China organized an expert conference on the results of the 20th CPC Congress 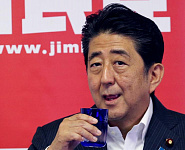 Turkey-Afghanistan-Pakistan summit to be held in Istanbul

Russia and Armenia agree on a defense loan