Kim Jong-un congratulated Vladimir Putin on the 75th anniversary of the Great Victory.

Chairman of the State Council of the DPRK Kim Jong-un sent a congratulatory telegram to President Vladimir Putin on the occasion of the 75th anniversary of the Victory, TASS reports. "75 years ago, the Russian people, having shown unparalleled heroism and selflessness, achieved the Great Victory in a just war against fascism, which threatened the fate of mankind, and thereby defended the Motherland and defended peace and security of the whole world".

The North Korean leader stressed that "the heroic deeds and historical merits of the Russian people will be eternal in the memory of the peoples of all countries who love justice and peace." According to Kim Jong-un, at present, "Korean-Russian relations, inheriting the precious tradition of friendship laid down by the feeling of comrades in arms in a holy war against common enemies, are developing further in accordance with the aspirations and aspirations of the peoples of the two countries, overcoming various challenges and trials." The head of the republic also expressed confidence that "the strategic and traditional friendly relations between the DPRK and the Russian Federation will be continuously strengthened and developed in accordance with the requirements of the new century."

"With all my heart I wish you and the Russian people, inheriting the tradition of the Great Victory in the war, we certainly achieved victory in the struggle to build a mighty Russia and stop the spread of the global pandemic of a new coronavirus infection," wrote Kim Jong Un.

Currently On the territory of the DPRK, 11 mass graves and 345 individual graves are looked after with special care, in which 1,375 Soviet military personnel are buried. In total, in the battles for the liberation of Korea in 1945, more than 4,700 Soviet soldiers and officers died or died of wounds.
Russia North Korea Kim Jong-un victory Great Patriotic War coronavirus
|
Facebook
|
Twitter
|
VKontakte
|
Odnoklassniki

For the first time, a woman became the head of a region in Kazakhstan

The heads of Uzbekistan and South Korea discussed the coronavirus

'Free and fair' elections to Mazhilis held in Kazakhstan

Dushanbe and Tashkent plan to launch production of military equipment 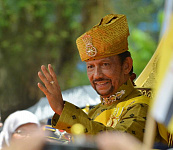 Armenian Prime Minister is on a visit to China

Sergey Lavrov and Rashid Meredov had a telephone conversation