The PLA told about the combat capabilities of different types of troops
"The regular air patrol by the Chinese Air Force of the skies over the territorial waters of the People's Republic of China in the area of Taiwan and the South China Sea demonstrates the country's firm determination to defend its national sovereignty and territorial integrity." This statement was made by the official representative of the People's Liberation Army Air Force, Shen Jinke.
Shen Jinke, official representative of the PLA Air Force:
"The islands in the South China Sea have been the ancestral territory of China since ancient times. China will not tolerate violations of its sovereignty, rights and interests in the South China Sea. Patrolling is carried out in order to promote combat training on the high seas and increase the ability to withstand various security threats. The Air Force steadfastly protects national sovereignty, security and maritime rights and interests, resolutely ensures regional peace and stability and responds to various threats and challenges."
Other types of troops of the People's Liberation Army of China are also ready to defend the country from any threats, which hone their combat competence during regular exercises. PLA ground units check their combat readiness at large military bases such as Zhurihe, Qingtongxia and Queshan. And in the sea, exercises were recently held on the destroyers Lhasa and Chengdu.
Tsai Qing, Captain of the destroyer Lhasa:
"We are unlocking the potential of personnel and equipment, continuing to innovate in combat operations and training methods. The crew has successfully completed about ten missions, including training tests and combat operations in the far sea."
Chinese warships regularly perform important tasks. For example, the frigate "Linyi" participated in escorting Chinese merchant ships in the Gulf of Aden, in the evacuation of Chinese citizens from Yemen and conducting military parades at sea.
And in July, the fleet of the PLA Navy was replenished with a super-modern ship: the aircraft carrier Fujian was launched in Shanghai. This is a completely independent development of China and the first Chinese aircraft carrier to use an electromagnetic catapult system to launch aircraft from the deck.
The People's Liberation Army, created and led by the Communist Party of China, has been guarding its country for 95 years. The anniversary of the Armed Forces of the People's Republic of China was celebrated in China on August 1.
The State Archive of Publications and Culture has opened in Beijing
The State Archive of Publications and Culture has officially opened in Beijing. It houses many exhibits: samples of ancient Chinese literature, documents about the Chinese Revolution, religious texts, modern editions, prints, postage stamps, coins, cinematographic and dramatic works on electronic media and much more.
Liu Chengyong, Director of the Chinese State Archive of Publications and Culture:
"We have built a main repository for bibliographic resources and a data processing center of the national archives. We also have exhibition and research centers and book booking and data exchange services. In the future, we will create a separate exhibition center of the national archive, which will be distinguished by the harmonious unity of political, ideological, historical and artistic values."
The State Archive started working simultaneously in several cities: in addition to Beijing, its branches opened in Xi'an, Hangzhou and Guangzhou.
The fish, a contemporary of dinosaurs, was recognized as extinct
The International Union for Conservation of Nature has officially recognized the extinct Chinese paddlefish – a fish that existed on Earth for millions of years and lived at the same time as dinosaurs. The last time a rare oarfish was seen was in 2003. It was called a "living fossil in the Yangtze River", but the reduction of food resources and human activity affected the reproduction of ancient fish.
Wei Qiwei, Researcher at the Yangtze River Fisheries Research Institute at the Chinese Academy of Fisheries
"Usually adult fish go upstream to spawn and then come back down to feed. The paddlefish feeds on many other species, but the fish resources in the upper reaches of the Yangtze River are still not rich enough to meet its needs."
Other fish species have disappeared in the Yangtze River: the Korean sturgeon is no longer found here, and the Chinese sturgeon is close to extinction. To avoid such tragedies in the future, the authorities banned fishing on some sections of the river until 2030. And last year, a special law on the protection of the Yangtze River came into force. The Ministry of Agriculture and Villages has developed a Plan to preserve the biodiversity of the Yangtze River. All in order to protect endangered species, restore the ecological environment and improve the monitoring system for animals and their habitats.
A park with mosquito traps has opened in Chengdu
On hot summer days, you are drawn to nature, but annoying squeaks and mosquito bites can spoil your rest. Residents and visitors of Chengdu now have a place where these insects almost do not bother: the first park with mosquito traps has opened in the city.
Shi Xiaoming, A Resident Of Chengdu:
"I used to get bitten by mosquitoes a lot. But today I've been sitting here for ten minutes and not a single bite!".
Mosquitoes track down victims mainly by the carbon dioxide that people exhale. And the traps absorb CO2 from the air and when the level of carbon dioxide reaches human, mosquitoes mistake this green box for a biped and fly into a box from which they can no longer get out. During three weeks of observations, about 12 thousand insects got into fifty park traps.
The park has also changed the landscape design and planted a minimum number of trees and flowers that attract annoying mosquitoes. 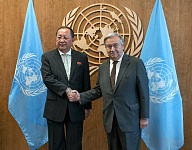 Birthday is celebrated by the President of Mongolia

The Presidents of Russia and Turkey agreed on new contacts