Israeli President to visit Bahrain for the first time

Yitzhak Herzog is planning to make the first ever visit to Bahrain.

Israeli President Yitzhak Herzog will visit the Kingdom of Bahrain in early December this year. This was reported on Thursday by the newspaper "Yediot Ahronot".

According to her, the Duke will become the first head of state of Israel in history to visit Bahrain at the invitation of the king.

During the visit, the Duke is scheduled to meet with the King of Bahrain Hamad bin Isa Al Khalifa, as well as with a number of high-ranking officials of the kingdom and members of the local Jewish community.

After visiting Bahrain, the President of Israel will go to The United Arab Emirates (UAE), where he will hold talks with the leader of the Emirates, Sheikh Mohammed bin Zayed Al Nahyan.

Before the conclusion of peace with the UAE and Bahrain, the Jewish state from Arab countries had diplomatic relations only with Egypt and Jordan. 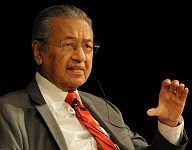 Sergey Lavrov to visit Indonesia and Thailand in August

Syrian pilots are mastering the MiG-29

Vladimir Putin plans to attend the G20 summit in Indonesia