Festive ceremonies and fireworks, congratulations from orbit and Big Data against poverty — See the Chinese Panorama – 319

It takes place annually at dawn in Tiananmen Square in Beijing to the sounds of a military orchestra. Many people wishing to see the solemn moment began to gather long before the event, some waited 12 hours to take a seat in the front row.

"I have watched the flag-raising ceremony on TV many times," said one of the viewers. "I can't believe I'm in Beijing and I'm going to see this breathtaking scene with my own eyes."

"I am very proud of my country and I am glad that together with everyone I am celebrating the anniversary of the founding of China in Tiananmen Square. This is a big deal. We have become part of a grand celebration," the viewer admires. And in the evening, a 15-minute fireworks display was held in the Macau Special Administrative Region of China in honor of the 73rd anniversary of the founding of the People's Republic of China.

It consisted of four thematic parts, each of which glorified an outstanding era, the pursuit of a shining dream and the cohesion and solidarity of the Chinese people.

"I am very excited and proud that my homeland has become so strong," "I wish our country prosperity and believe that it will become even more powerful," the audience says. The first part of the fireworks was dedicated to the anniversary of the founding of China, it lit up the sky with gold and red.

The second part with silvery volleys showed the pristine simplicity and splendor of the region. The third carried the meaning of Macau's close connection with the motherland. And the last part of the fireworks, with a dominant golden tone, reflected how Macau is moving forward together with the Celestial Empire and in the future will make an even greater contribution to the realization of the Chinese dream of a great national revival.

This is the first congratulation on a National holiday recorded on board the Tiangong Space Station, which acquired an L-shaped shape last week. This happened after moving her laboratory module "Wentian". The docking maneuver lasted about an hour, after which the combination of the Tiangong space station changed from a straight line to an L-shaped one. When the laboratory module "Mengtian" arrives, the station will take a T-shape.

Liu Yang, Chen Dong, and Cai Xiuzhe, Shenzhou-14 crew: "This month we will meet the Mengtian laboratory module and witness the completion of the construction of the Chinese space station.
Thank you all for your support in this great era. We will make every effort and successfully fulfill this mission, and glorify China."

The detailed history of each poor family was easy to find with the help of Big Data.

Analysis of big data showed that one of the main causes of poverty were diseases. So, residents of Xilin County of Guangxi Zhuang Autonomous Region could not afford a full-time doctor, which is why 26-year-old Li Wenbin was bedridden. For 6 years, the man was tormented by pain in his shoulder. His medical history was made public thanks to anti-poverty specialists who conducted an apartment-by-apartment survey of residents. They transferred the information to the national database. After that, along with the stories of other families impoverished due to diseases, Lee's case was sent to the health authorities. As a result, 118,000 medical workers from thousands of top-level city hospitals were sent to poor districts of China. Doctors from Shenzhen City in neighboring Guangdong Province arrived in Xilin County and found Li Wenbin. He was diagnosed with a benign tumor of the brain and spine, which required immediate surgery. Medical insurance and the fund for assistance in serious diseases covered the costs of the operation – and this is tens of thousands of yuan. Doctors continued to help Lee in rehabilitation. Now the man has fully recovered and returned to normal life.

Li Wenbin, a resident of Xilin County: "I was told that my illness is difficult to cure.
I thought I'd never get up. And now I'm enjoying life!" Over the past ten years, various methods of combating poverty have emerged in China, including through employment, vocational training and financial support.

Thanks to this, almost 100 million rural inhabitants of the Celestial Empire have escaped from poverty. The story of Li Wenbin's miraculous recovery was included in the cycle of the 13-episode documentary "The Secret of Success of the Last Decade", created by the Media Corporation of China. It shows the stories of real people from different parts of the country and strata of society.

Sergey Lavrov will meet with a colleague from Kyrgyzstan 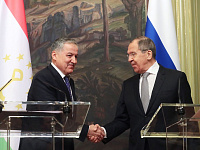 Chinese leader to hold series of bilateral meetings ahead of Olympics