Chinese Deputy Foreign Minister Ma Zhaoxu made a statement about the tripNancy Pelosi to Taiwan. The politician condemned this visit and noted that it contradicts international agreements.

Ma Zhaoxu, Deputy Minister of Foreign Affairs of the People's Republic of China:
"The one China principle is the basic norm of international law, confirmed by the UN resolution. Based on this policy, China is developing relations with other countries. This is a red line that cannot be crossed. There is no room for ambiguity or arbitrary interpretation. The United States has committed itself to follow the one China principle in three joint communiques. But in fact, Washington has distorted it for many years, unilaterally adopting the "Law on Relations with Taiwan" and the so-called "Six Guarantees". This is contrary to international law."

The Deputy head of the Ministry of Foreign Affairs of China noted that there is no so-called "middle line" in the Taiwan Strait, and Chinese military training operations around the island of Taiwan are open and adequate. In contrast to the actions of the United States and its allies, who often enter the waters adjacent to China, rattling weapons and inciting unrest, he saidMa Zhaoxu.

Ma Zhaoxu, Deputy Minister of Foreign Affairs of the People's Republic of China:
"It is the United States that threatens peace and stability in the Taiwan Strait. The Chinese Armed Forces are conducting military exercises around the island to protect China's sovereignty and territorial integrity. These countermeasures comply with our laws, norms of international law and world practice."

Ma Zhaoxu added that there is no so-called middle line in the Taiwan Strait, and called the Chinese military exercises transparent and expedient.


Taiwanese farmers and fishermen suffer the consequences of the visitPelosi to the island
Taiwanese farmers and fishermen expect prices to rise due to trade restrictions imposed by mainland China after a visit to the islandNancy Sang si. China has stopped importing lemons, oranges and other citrus fruits from Taiwan, as well as chilled saber fish and frozen horse mackerel. In past years, residents of the Taiwanese village of Ruisui sent half of the grapefruit harvest to the mainland. Now local farmers have found themselves in a difficult situation due to the loss of a large market.

Yang Hongzhi, fruit seller:
"I was caught off guard. Farmers have been working for a whole year and are now suffering heavy losses. How will they be able to recoup their work?"
There are about 200 fishing boats in the village of Suao alone. If they do not go fishing for three days, the losses may exceed 11 million yuan.

Local fisherman:
"Demand has dropped sharply, and there is nothing we can do about it. Many fishermen no longer have the opportunity to catch saber fish."

Lai Yueqiang, Taiwanese political commentator:
"Mainland China's countermeasures have forced representatives of Taiwan's food industry to think about whether it is worth continuing to support the Democratic Progressive Party and its attempts to achieve the island's secession. This political association has stated that it is ready to provide subsidies to local residents, but they can only be a temporary solution to the problem."

The observer added that entering a wide market could open up limitless opportunities for Taiwanese farmers and fishermen.

The Celestial Empire launched three satellites from the Jiuquan cosmodrome on a Ceres-1 carrier rocket intended for commercial use. New technologies will be tested on satellites. The devices will also fulfill paid orders and conduct remote sensing of the Earth. This is the third launch of the Ceres-1 launch vehicle, which was developed by the Beijing company Galactic Energy. It became China's first privately produced rocket successfully launched into orbit. The load capacity of Ceres-1 is 30% higher than that of traditional solid fuel analogues. At the same time, the cost of a new launch vehicle is a third lower due to the use of 3D printing and other innovative technologies.


Hong Kong and Hainan have relaxed measures against COVID-19

Hong Kong is preparing to reduce the quarantine period in hotels from seven to three days after entering the region. After that, tourists will be waiting for a four-day health monitoring, during which they must regularly take rapid tests for antibodies and nucleic acids.

John Lee, Chief Executive of Hong Kong:
"Monitoring can be carried out at home or in a hotel. During the period of medical observation, tourists will be able to go outside, but areas where a vaccination pass is required will be closed for them."

During the monitoring period, tourists will be allowed to use public transport and enter shopping centers, but only in masks. Restaurants, bars and other establishments where people take off their personal protective equipment and gather in large groups will remain banned. The region will also introduce a system of codes for health reasons. After a positive test for coronavirus, people will be assigned a red code, during quarantine and medical supervision — yellow, and after this period — blue. Meanwhile, the first 125 tourists who were quarantined due to a sudden outbreak of COVID-19 in the resort city of Sanya were able to fly from Hainan Island. Before leaving the province, they received negative results of PCR testing. The remaining tourists will also be able to return home in separate groups after receiving negative tests for coronavirus three times in three days.

Putin and Xi Jinping discussed the implementation of bilateral agreements

The World forum of Marxist parties has opened in Beijing 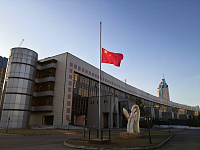 Xi Jinping arrives in Moscow on an official visit