On Tuesday, Russian Minister of Education Olga Vasilyeva gave a tour of the Quantorium Children's Technopark in Skolkovo for Akie Abe, wife of Japanese Prime Minister Shinzo Abe. This is reported by TASS.

carbonsital products: medical prostheses of the hip joint, intervertebral discs. The uniqueness of this material, made on the basis of carbon alloys, lies in the fact that it does not cause rejection in the human body.


Specially for Akie Abe, students of the technopark made a medallion with the Quantorium logo from carbonsital.


In addition, Akie Abe demonstrated a special tool to quickly stop bleeding. It was created from yeast waste. As Olga Vasilyeva said, the idea was born when the task was to find a way to dispose of such waste. 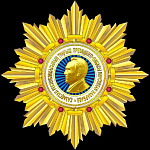 The President of Vietnam warmly welcomed the leader of the DPRK Kim Jong-un, who paid an official visit to Hanoi

Iran will join the SCO countries

Relations between Russia and Iran are on the rise

Russia is preparing for the visit of Shavkat Mirziyoyev

Cadets congratulated on the birthday of the Honorary President of the A.

Tajikistan is negotiating with partners in the oil and gas industry

Saiga population is recovering in Kazakhstan

The first university Competence Center in the field of cybersecurity wil