Presidential elections in Cyprus will be held on February 5, 2023.

The presidential elections of the Republic of Cyprus will be held on February 5, 2023, but if a second round is needed to determine the winner, it will take place a week later — on February 12. This was announced on Tuesday by the Interior Ministry of the island state.

On December 23, 2022, the order of the Minister of Internal Affairs on holding elections will be published. December 27 will be the last day for registration in the voter lists and for submitting applications for voting at polling stations abroad. The candidacies of all participants in the elections will be officially presented a month before the vote — on January 5.

The Interior Ministry stressed that all these dates were agreed upon during consultations with political parties.

According to the forecasts of political analysts, three candidates will lead the real struggle to reach the second round of the presidential election: the former head of the Cypriot Foreign Ministry Nikos Christodoulidis, Chairman of the ruling Democratic Assembly PartyAverof Neofitu and a well-known diplomat Andreas Mavroiannis. At the same time, all three favorites are systemic politicians close to the current government. The current president of the country is 75-year-old Nicos Anastasiades — announced his intention not to take part in these elections. 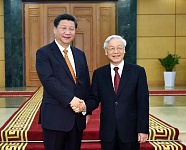 Putin met with the President of Tajikistan

Sergey Lavrov on key prospects for cooperation between Turkmenistan and Russia

Syrian military honored at the Russian Center in Damascus

Peace will be established in the Persian Gulf countries