The leaders of the SCO member states will hold a face-to-face meeting for the first time after a long break due to the COVID-19 pandemic. The Shanghai Cooperation Organization Summit will be held in Samarkand on September 15-16.

The summit will be attended by the leaders of the SCO member states - Russia, Uzbekistan, China, Kazakhstan, India, Kyrgyzstan, Pakistan, Tajikistan, as well as observer countries at the organization – Belarus, Mongolia and Iran.

Iran will complete the procedure of joining the Shanghai Cooperation Organization at the upcoming summit. This was stated by SCO Secretary General Zhang Ming in an interview with TASS.

Another observer country, Belarus, will apply to join the SCO as a full participant at this summit.

The agenda of the 22nd meeting of the Council of Heads of State of the Shanghai Cooperation Organization includes topical issues of the development of multilateral cooperation, practical aspects and priority tasks of the SCO development.

As reported on the official website of the chairmanship of the Republic of Uzbekistan in the Shanghai Cooperation Organization in 2022-2023, the meeting will also include an exchange of views on international and regional issues.

At the same time, geopolitical issues will not be discussed at the meeting. This was stated by the Consul General of the Republic of Uzbekistan in Yekaterinburg Abdusalom Khatamov. He noted that the summit is scheduled to discuss issues related to the trans-Afghan transport corridor and other topics related to good-neighborly relations and economic cooperation.

The SCO summit in Samarkand will conclude Uzbekistan's chairmanship in the organization. For such a high-level event, the infrastructure in the ancient city was modernized. In particular, a new airport terminal was opened for guests. According to Consul General Abdusalom Khatamov, officials will be able to plunge into the unique atmosphere of Samarkand and get acquainted with the rich culture of the whole of Uzbekistan: 40 artisans from all over the country will arrive in Samarkand to conduct master classes and show the breadth of cultural traditions of different regions of the country.

"There is no doubt that this legendary city will open another page of the SCO's success story. The glorious historical heritage of Samarkand will contribute to this. For many centuries, this city has connected countries from Europe to China like threads, connecting North and South, East and West into a single node," Uzbek President Shavkat Mirziyoyev wrote in his article "The Samarkand SCO Summit: Dialogue and Cooperation in an Interconnected World", published on the eve of the SCO summit.

Moscow and Iran discussed the importance of countering the pandemic together 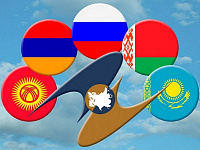 The EAEU will not expand yet

The meeting of the leaders of the CIS countries will be held on December 28 in St. Petersburg