The President of Kazakhstan will pay an official visit to Azerbaijan in August.

President of Kazakhstan Kassym-Jomart Tokayev will pay an official visit to Azerbaijan in August. This was announced on Monday by the Minister of Foreign Affairs of KazakhstanMukhtar Tleuberdi at a briefing following the results of the first trilateral meeting of the Foreign Ministers and transport departments of Azerbaijan, Kazakhstan and Turkey in Baku.

"We express hope for the successful holding of the official visit of the President of KazakhstanKassym-Jomart Tokayev in Azerbaijan in August of this year. We expect that it will open a new stage in the development of Kazakh-Azerbaijani cooperation in all spheres," the Kazakh minister said. 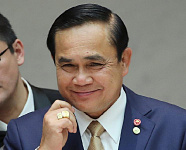