Kazakhstan is moving to a new form of political structure

Kassym-Jomart Tokayev announced the transition of Kazakhstan to a new form of political structure.

Kazakhstan is moving to a new form of political structure, constitutional reform will be carried out consistently and clearly. This was stated on Monday by the current President of the republic Kassym-Jomart Tokayev.

"We will implement the constitutional reform clearly and consistently. We are moving to a new form of the country's political structure," Tokayev was quoted by the telegram channel of his election headquarters.

Tokayev announced drastic changes in the economy of the republic. "We will improve the welfare of citizens," he said.

"To realize all these goals, we need unity. Therefore, I call all of you to unity," the President stressed.

According to the results of the exit poll conducted on Sunday by the Institute of Public Policy of the Amanat party, Tokayev wins the presidential election with 85.52% of the vote. According to exit polls of the Institute of Integrated Social Research "Socis-A" and the International Institute of Regional Studies "Open Society", he leads with indicators of 82.02% and 82.45%. According to these studies, from 1 to 4% of voters voted for other candidates. 3.4 to 5.2% of those who voted were against all of them.
Kazakhstan Kassym-Jomart Tokayev constitutional reform TASS
|
Facebook
|
Twitter
|
VKontakte
|
Odnoklassniki 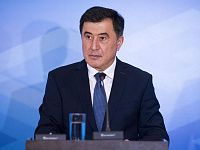 The new president of Armenia took the oath

Sanctions policy does not balance the EU: in Moscow summed up the results of relations between Russia and the EU for 2018

Xiang Xiang to stay at Tokyo Zoo due to pandemic